Dijkstra's is a greedy approach to find the shortest path in a graph with positive weights. It has many useful applications in networking and it can be extended to a variety of problems.

Dijkstra works by beginning at the starting node repeatedly picking the next closest node of those already visited.

If Dijkstra's is implemented using a priority queue, the run time is O(n log n).

If a negative cycle exists within the graph, then the algorithm breaks as it will repeatedly try to take the negative edges. See the Bellman Ford algorithm for finding negative cycles in a graph.

A naive fix for negative cycles would be to offset all edges by the largest negative edge and then subtract it from the resulting total but this does not work. Consider an example where you have the path from A to B. The first path from A->B has a weight of 2 and the second path has weights 1,1,-2. Clearly, the second route has less cost. If we try to make the length positive by adding all costs by 2, we will have the first path of weight 4 and the second path of weights 3,3,0. From the adjusted weights, the first path minimizes the total cost which is incorrect.

At each node we visit we keep track of the minimum cost it takes to reach to reach that node from the starting node.

When we reach a node for the first time, it will be the shortest path from the start node to that node. (Try to prove this to yourself). 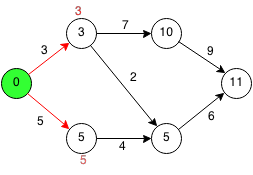 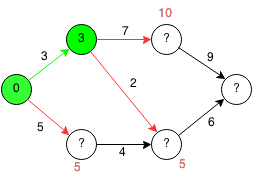 We are indifferent to both 5's as they are both the minimum and we can choose either. We mark the node as visited and we find the minimum costs to other nodes which are 5,10,11. 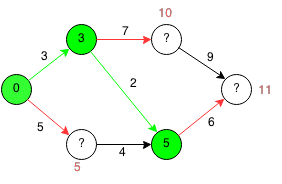 We take the next smallest which is 5 and we mark the node as visited. The next costs are 10 and 11. 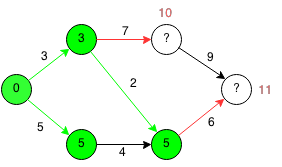 We take the smallest which is 10 and we now only have one last node to reach at a cost of 11.

Finally, we have the shortest path from the start node to the end node.

We can implement Dijkstra's algorithm efficiently using a priority queue.