Indexes of a heap 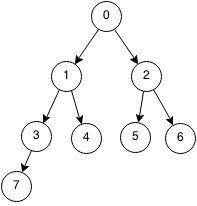 We will implement a max heap in Java and in our class we need to store the elements in the heap and the size of the heap.

When the heap reaches capacity, we need to resize it to be able to contain more elements.

Swap will switch two nodes in the heap.

Pushes the number x into the priority queue. We can do this by adding it to the bottom of the heap and then keep swapping it upwards if it is greater than the parent. 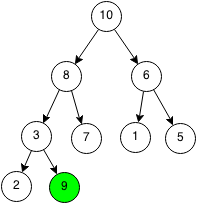 The parent of 9 is 3 and smaller so we can swap the two. 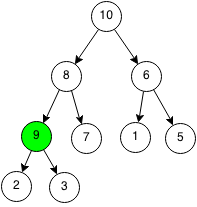 The parent of 9 is 8 and smaller so we can swap the two. 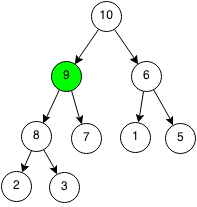 Since the parent of 9 is 10 and greater than 9 then we can stop. We can also see that the heap structure is still valid.

Popping removes the greatest element in the heap. Since the root is guaranteed to be the greatest element as a property of a heap, we remove it and return that element. After removing the root, we replace it with the element at the bottom of the heap and we can keep swapping it with its children until the heap property is satisfied.

Let's do an example of where we pop from a heap. We want to remove the root of the heap and replace it with the last element of the heap. 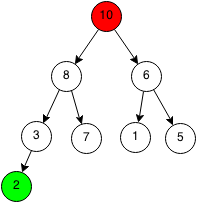 We switch the node and replace it with the last element in the heap. 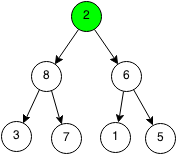 The largest child is the left child of 8 and it is larger than the current node, so we swap them. 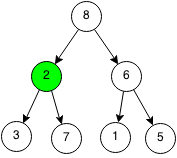 The largest child is the right child of 7 and it it larger than the current node, so we swap the nodes again. 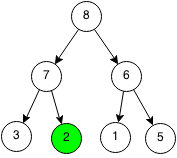 Heapify takes an array of N elements and transforms it into a heap in the same array. The runtime of heapify is suprisingly O(n) and the proof of that is beyond the scope of this book.